Steel rails are used by the railroad and manufacturing industries as a method of reducing the rolling resistance of extremely heavy loads. Often the rails form the basis of the production line itself and loads are moved along the rails from one work station to the next, into and out of autoclaves, drying kilns or maintenance workshops. Since the wheels on the rail bogies, rail cars, wheelsets, transfer cars, and kiln cars are flanged to prevent the load from coming off the rails or, the rail itself is designed in such a way to prevent the wheels from deviating left or right, it is possible to apply a pushing and pulling force both in the center of the load and also offset to one side of the load with an extension bar. This is particularly useful when there is an inspection or open pit between the rails. To safely move the load, the extension bar may be temporarily extended, either to the left or the right, which enables one of our Power Pushers to apply a pushing or pulling force. 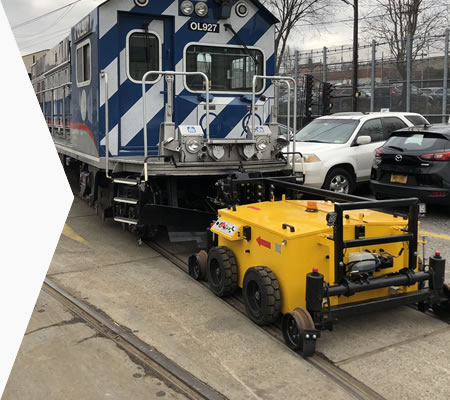 "I have had a few people try it out with our custom cart and they like it very much! It makes the job quite simple. We like the speed of it, how it handles, and how easy it is to maneuver."

"One worker now moves the rails of beef sides all day long without breaking a sweat."

"I am impressed with Nu-Star’s willingness to do a custom design for such a challenging application and I am happy with the final product."

“The mover is a safe, convenient solution for moving aluminum in various forms, from flat stock to completed boat. It requires no special training and saves us time and labor."

“This was the first electric wheelbarrow I have used,” said Conn. “It was great not to have to worry about noise and gas during the project."

“The ramp was really steep, and really slippery, but the electric wheelbarrow went up smoothly with no problems at all."

“We get more production out of our crew with the E-750 Electric Wheelbarrow, completing projects 20%-30% faster, morale is improved and they are happier and less tired at the end of the day"

“Very easy to control and maneuver, I like a lot of the built-in safety mechanisms it has that I wouldn’t have even considered."

The specified gallery is trashed.