Putting R&D at the Forefront of Safety 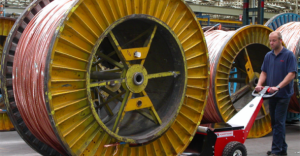 This cable manufacturer had a safety issue that seemed impossible to solve.
The company produces the kind of gigantic copper cables used in municipal lines and to wire stadium, wrapped up in reels that can reach 10 feet high and weight up to 25,000 pounds.

Once these reels are wrapped and out on the floor, moving them is relatively safe and easy.
The problem was getting them out of the wrapping machine—an area too dangerous for any worker or material handling equipment to enter. But they had to move nonetheless.

“To get these reels out, workers were basically standing on the edge of the reels to roll them,” explains Ryan Blesi, vice president of material handling at Nu-Star Inc. “This was a huge safety concern.”

And that was the concern Blesi and his team were called in to solve.

NuStar manufactures a line of high power tuggers and pushers that are designed to handle this kind of massive job. They move cars and planes and trains, anything, Blesi says, with wheels.

But there was nothing in their product line up that could help this company get their workers off the reels. There was no product in anyone’s portfolio that did anything like it.

But that wasn’t an issue for Nu-Star.

This, he says, is what sets his company apart in the industry, and also why this cable manufacturer came to them for a solution. 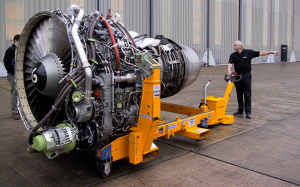 An example of one of Nu-Star’s extreme custom engineering projects.
Image: Nu-Star Inc.

NuStar tackles every new sale with a full engineering team ready to customize a unique product to solve their clients’ problems—inventing original designs and unimaginable connectors in a model that puts R&D right on the front end of the business. “We’re experts in doing quick R&D projects,” Blesi says. “We put work into designing the right equipment with the proper attachment, rather than just sending a boxed product out and have them figure it out themselves.”

“We want them to concentrate on their business, not ours,'” Adams adds.

These customized jobs can run through the entire product, from reconfiguring their core technologies to provide more horse power or speed, better roll or turning, to often complex attachment builds like the cable manufacturer required.
This can be a large R&D undertaking, but it can also be a lot of fun for the engineers, says Blesi, who began his career at NuStar on the engineering team.

“These are very gratifying projects in a sense,” he explains. “As an engineer, you like to help people; you like to solve people’s problems. That is exactly what we get to do.”

Back at the cable maker’s plant, the solution Nu-Star’s team came up with highlighted this engineering focus like no other solution could.  The team designed a gigantic, goalpost-shaped attachment with long arms stretching out horizontally to catch each side of the rolls. Once in position, grips at the end of the arms flip shut and hold the reel tight for transport.
A genius solution, invented just for them.

With it, operators simply drive the attachment into the machines and easily pull the reel out to overhead cranes or forklifts.
That means no more climbing onto 25,000 pound reels, no more death-defying feats on the job. Problem solved.
The project was such a success that the facility has ordered five more systems like it and NuStar has already received calls from two other facilities interested in the solution.

Bespoke engineering, of course, in an unusual market for a material handling company to play in. But, Blesi says, it’s necessary to help their customers really focus on safety and productivity on the floor.  “We’re helping our customers eliminate forklifts and move things that can’t be moved,” he explains. “Even bigger than that, we’re helping them move them safely.”

“People are moving things that are too heavy and they are getting injuries,” he adds. “For our equipment, and the engineering work it requires, the cost is nominal compared to shoulder injury or a back injury. That’s all part of producing better solutions to the customer.”
It’s also good for business.