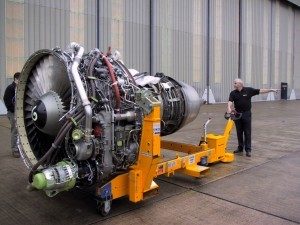 Successful material handling operations must always find new ways to maintain the delicate balance between productivity and safety.  For 45 years, Nu-Star Inc. has carried the brunt of both of those burdens with the Power Pusher, which has a design that has stayed the same, yet is always changing.

Recently, when a Georgia-based wire and cable manufacturer contacted Nu-Star Inc. for a new way to remove copper reels 6-feet in diameter from a spooling machine using the material handling equipment manufacturer’s electric Extra Duty Power Pusher, which can move 9-ton loads resting on carts with two swivel and two fixed casters. The issue was that the PowerPusher is a rather stout battery-powered tug; the operator is usually about five feet from the wheeled object being moved. “From a safety standpoint, they don’t want people getting too close to these large machines,” says Ryan Blesi, vice president of material handling for Nu-Star, who personally assisted the client with by providing a customized Extra Duty Power Pusher, a battery-powered tug which allows two operators to move up to 9 tons. “There is increased risk of serious injury or death if operators are forced to come within close proximity of the wire feeding equipment during the loading and unloading procedure.” 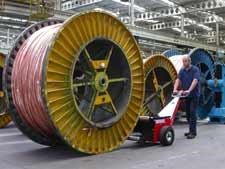 The solution was to engineer a U-shaped attachment that would clasp onto the backside of the reel. Workers manually engage and disengage the arms’ latches through a linkage system and hand controls, able to pull the behemoth spools backwards without entering the safety danger zone. The client was so pleased, it ordered four of the Super Duty Power Pushers to handle 20,000-lb reels for another facility.
This is a win-win for both the client and provider, but most of all, for the workers themselves. The median hourly pay for a material handler is $13, hardly enough to risk being drawn and quartered by machinery. A company who focuses on safety would be able to allay fear of injury or worse, and thus, improve that worker’s mental state.

The American Society of Safety Engineers (ASSE) takes the same the position, concluding that “safety and health management programs improve a company’s bottom line, including productivity and employee morale.”

The Power Pusher has been around since 1971, just a year younger than OSHA itself.  Its origin is rooted more in productivity more than safety.

“The main use was pushing disabled automobiles,” says John Adams, vice president of sales and marketing at Nu-Star. “Rather than taking four or five guys out of the service area earning money for you, you had them pushing a vehicle into the shop.”

With the Power Pusher, it took only two: One behind to operate the tug’s throttle and one to steer the car. It wasn’t until the early ’90 that the company realized it had material handling applications, Adams says.

The actual body remained largely unchanged, save for a few tweaks.   Single-speed controls evolved to variable-speed for more versatility, the 12V battery has grown to 24 and 36 V for more power, and the steel grip handle has metamorphosed into a more ergonomic butterfly control, similar to a pallet jack.

The Extra Duty’s gear ratio of 6:1 generates 600 lb. of push force to give, while the Super version has a 3:1 ratio with three times the wattage.

If you’re worried about pushing a heavy load like a tractor trailer up a large incline with a relatively small tool, that’s understandable. Automatic braking and anti-runaway keep you from getting flattened, assures Blesi.

The Power pusher’s biggest safety feature, though, is its communication process with its clients.

“Our units are built individually for specific applications,” Adams says.  “Each is handled by an engineer to make sure customer is getting the right product.”

This has led to potential life-saving changes for one client in the vacuum-packed food industry. In its packaging facility, the rail-guided rolling baskets containing the cans of food would need to be manually pushed into the retort oven, where they would be steamed and pressurized. 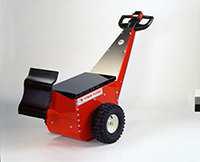 Anytime a worker enters a confined space that like that, they leave the door open for tragedy. In 2012, a worker at Bumble Bee Foods was accidentally killed in a similar type of oven. That process implemented pallet jacks to handle the baskets and required the worker to enter the space. Here’s the Department of Labor accident report.

Nu-Star helped its client avoid making the same mistakes that Bumble Bee made by making the Power Pusher operation remote controlled.
“The person no longer needs to go into the oven,” Adams says. “It became a very needed safety feature.”
And safety is more important than ever now, Adams insists.

“The safety manager used to be the guy sitting in the back room with a desk full of dust,” Adams continues. “Now he’s become the prominent guy on the floor.”

He knows this by dealing with them for the past two decades. In that time, he has noticed that many of the companies who inquire about the Power Pusher do so re-actively, not as a preventative measure. That is to say, some poor material handler, making $2 less than fast food workers, have recently incurred a serious back or shoulder injury. The Power Pusher is the way to keep this from recurring.

OSHA advises that you should: Limit the weight of loads so the necessary pushing force is less than 50 pounds. The greater the force that is necessary to push the load, the greater the risk of injury. So, while preventing your crew from getting turned into taffy or cooked alive are the more sensational benefits of the Power Pusher, or any similar material handling device, the ability to reduce the more common nagging injuries to backs and shoulders may be its greatest feature.

And getting one before worker injuries, not after, may end up not only saving your employee from a lot of pain and surgery, but also will affect your bottom line.

“Workman comps claims are extremely expensive,” Blesi reminds. “The cost of our equipment compared to the price of an injury claim, whether it’s the loss of production or medical bills, there’s a dramatic difference.  We are much less expensive.”

For more info on the Power Pusher line, contact RBlesi@nustarinc.com .