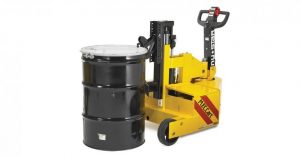 The Problem
A vinyl manufacturer had a giant bottle neck on the line that literally rested on the backs of its workers to resolve—a scenario so rife with risks and safety issues that it could only ever end in disaster.

The problem was this: everyday, a small team of workers were responsible for unloading giant, unwieldy pallets of vinyl rolls. These rolls — measuring up to 6 ft. long and weighing up to 1,200 pounds — had to be rolled off the pallet, propped up on end, and wheeled into cold storage without the aid of any powered equipment.

This meant that workers had to perform this job without crushing their hands or feet, without destroying their backs and shoulders, and without damaging the product in the process. All of which is, if not impossible, at least improbable in the long term.

The biggest issue for them was that there was nothing on the market that could replace this human effort — there was no off-the-shelf material handling system available anywhere that could
somehow lift these soft rolls, manipulate them into position, and also transport them where they needed to go.

This is a common issue faced by manufacturers. With all of the new equipment available today, all of these robots and sophisticated material handling systems, some jobs are just too specific and too complicated for generic solutions.

So, this company did what many do in this situation: they called the customization experts.

“Customers come to us with complicated problems,” explains Ryan Blesi, vice president material handling division at Nu-Star Inc. “They don’t have a particular solution or machine in mind, though. They say, ‘Here is what we have, tell me what you can do for us.'”

This, he says, has become a fairly standard occurrence at Nu-Star over the years. And for good reason.

On the face of it, Nu-Star is a material handling company. It sells a few core technologies — most notably, the PowerPusher® and the PowerTug™ — designed to help move incredibly heavy material with incredible ease.

While these tools are impressive on their own, what really makes the company interesting is the custom engineering it does on top of them.

This customization, he says, is all in the attachments. Nu-Star works closely with clients to design and build custom end pieces — giant lifting contraptions, claws, cranes, and everything else imaginable—that are engineered to handle specific materials and specific issues.

This can mean moving airplanes or cars on the production line; it can mean pulling trains and preposterously large metal coils. Or, it could mean carrying the load for vinyl makers. 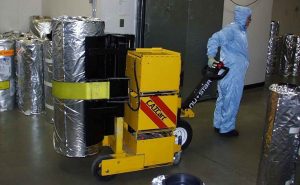 The answer for this vinyl problem came in the form of the MFC-100 — Nu-Star’s powerful lifting and pulling tool designed for heavy, awkward pieces like this.

The core device can lift up to 5,000 lbs. and push/pull up to 15,000 lbs. and is equipped with all of the power controls for easy transport that Nu-Star is known for.

Nu-Star also designed a custom attachment designed to carefully squeeze and lift these rolls right off the pallet to finally take the strain out of the job.

“With our machine, they are able to go into the pallet at an angle and attach a special strap,” Blesi explains. “They squeeze the roll at that point, pick it up and then use the machine to walk it to the area they need to store it in.”

This system, he says, removes all of the safety concerns the workers had been enduring.

Read more about the Nu-Star Inc’s MFC-100 on the NED Directory.

At the same time, he says, the system cuts the task down from a three-person job, to just one.

This kind of case study, Blesi argues, is the real benefit his company offers in these situations.

“Our equipment has built a strong reputation in the market,” he explains. “That’s because we put time into getting the right equipment to every customer, and time putting the right attachment on it, and then backing it up once it’s done and in service.”