Battery Powered Carts Take the Pain out of Cylinder Transportation 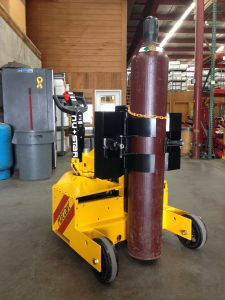 Health care employees and manufacturers can improve health, safety and efficiencies with battery-powered carts instead of dollies or forklifts.

Medical workers are in pain. Lifting-related injuries aren’t limited to manufacturing or other labor-intensive industries. The number of musculoskeletal injuries from overexertion in health care occupations rank among the highest of all U.S. industries, according to The National Institute for Occupational Health and Safety.

In fact, nursing assistants ranked second next to laborers and material movers for reported musculoskeletal disorders in 2015, according to the most recent data from the Bureau of Labor Statistics. The medical industry may be able to reduce the potential for injuries by adopting material-handling systems similar to those found on plant floors, construction sites and warehouses.

Many injuries in the medical field are related to lifting or moving patients. But health care workers often move cylinders for medical gases, such as oxygen. Power Pusher, a division of Nu-Star Inc., a manufacturer of battery-powered material handling solutions, has designed a cart that can help medical workers safely lift and transport cylinders. 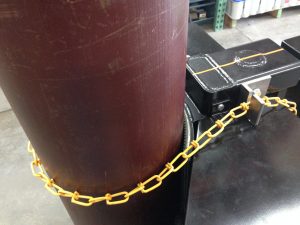 The company’s MFC-100 cart can transport cylinders and drums up to 800 pounds. Typically, workers must manually move cylinders onto a dolly, or in some cases, they’ll roll, or shimmy, the cylinders to the intended location, says Ryan Blesi, vice president of material handling and a design engineer at Power Pusher.

“From a safety aspect, the carts are about reducing back strains, shoulder injuries, foot injuries and hand injuries,” Blesi says. “Those seem to be the most common issues we encounter.”

The unit is a unique piece of equipment among the Power Pusher line because it has a lifting component, Blesi says. It comes with a clamp that can grab the cylinder and lift it off the ground, which reduces or eliminates the need to manually move cylinders. It also includes a redundant safety chain to further secure the cylinder if the clamping mechanism were to fail.

“For example, if someone were to unintendedly open the clamp, or whatever it may be, the cylinder would not fall forward,” Blesi says. “It would remain standing up.”

Other key safety features include an ergonomically designed handle with hand guards and a variable-speed throttle. All of the control operations are located on the handle so users don’t have to bend or exert additional effort to operate the machine, Blesi says. It’s also a walk-behind unit so there is line of sight so you’re not blocked by anything.

In addition, it includes an emergency reverse button that a worker can push to move the equipment forward if the worker cannot control the equipment and is at risk of being pinned against a wall.

Another important attribute is the option to customize the carts to meet specific needs. For example, users can select different gear sets or motor controller parameters. They may also want to add a light pole for additional safety, Blesi says.

“We customize 80 to 90% of the products that leave our facility, so we’re very involved with our customers and their specific needs,” he says. 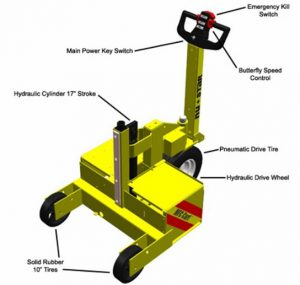 The last thing a medical environment needs are fumes or emissions that can cause discomfort or health risks to patients. This feature is valuable for lift application where emissions might be a concern.

“In a hospital setting it’s maybe not as much rocket science because, obviously, you don’t want propane or gas in that situation,” Blesi says. “In a manufacturing facility propane and gas powered forklifts are common. But OSHA is cracking down on environmental standards in manufacturing facilities, so we’re seeing more fully electric pieces of equipment.”

In many cases, Power Pusher’s battery-powered cart can replace a forklift, Blesi says.

In these situations, the MFC-100 eliminates the need for gas or propane tanks that would be required for forklifts, Blesi says.